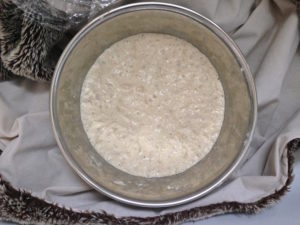 ….it’s all about the dough.

Meet Lucy Liu, offspring of Priscilla. I have to tell you , the PRESSURE to come up a name!!!! In the end I couldn’t think of anything witty or original so I asked Rich and he came up with Lucy Liu {which I approved of because Lu is Road in Chinese so I thought it appropriate} and decided to ignore the actual reason why he chose the name…..

To say she’s taken over the house would be a bit of an understatement. 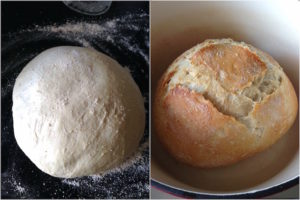 I came back from Hong Kong last week with a stinking cold and told Rich that if I was coughing and spluttering in the night I’d move to the sofa. The next morning he walked into the kitchen and asked why there was a blanket in the bath and I turned and pointed at the oven and said  ‘there’s sourdough in the oven’.

Which of course made total sense to me.

The poor boy looked at me as if I’d lost the plot and said ‘okaaaaaay, but why is there a blanket in the bath?’ Thinking I’d spent the night sleeping in the bath he was quite rightly questioning my sanity….

So why the bath? Well it’s been a bit cold lately and the kitchen is freezing overnight, but there is underfloor heating in the bathroom so I’ve been wrapping Lucy up during the day to wake her up but at night she sleeps in the bath – at Celia’s insistence because she was worried about mishaps in the night 🙂 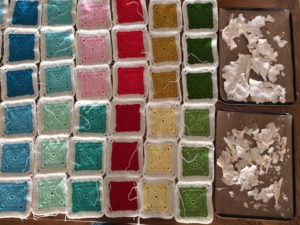 Celia The Fair Godmother of Sourdough coached me through the whole process via email and instagram and behaved little a besotted grandmother begging for the first glimpse of the crumb!

The first bake was a triumph if I do say so myself. BUT – the second was even better.

This one was baked in a cold pot and dusted with oat flour and was just about perfect. Ha, listen to me patting myself on the back:)

I gave Jen some of the original starter and Lucy Liu has already spawned Charlie. AND Charlie has been passed onto another friend who has yet to bake. Plus my neighbour Scott got half of the second loaf and some starter…. Charlie’s Angels in Shanghai is in production folks.

But wait there’s more. That boy of mine is the most patient man in the world. Not only is the bath full of blankets and sourdough, but the table has been out of use too what with my latest crochet blanket and dried starter.

Truth be told we don’t eat a lot of bread, in fact only when we are dining out really. BUT – when the bread knife goes through the crust for the first time and I hear that wonderful crack….it’s quite magical knowing that I made it myself and that it’s so damn good.

I’m still working this whole sourdough thing out timing and quantity wise. Last night Rich walked into the bathroom at 11pm to find me on my knees peering into another bowl of frothy starter on the floor and wondering if it was bubbly enough to add flour and water. This time he just muttered ‘you are absolutely mental woman’ and walked out.

As I was cleaning my teeth I remembered Emilie at The Clever Carrot had left me a comment telling me she did the drop test with the dough. So off I went to the kitchen and 10 minutes later Lucy was wrapped up in the bath once more…..

Next up will be rye and spelt versions. Although Emilie’s Sourdough Noir looks so gorgeous it’s totally distracting me.

So really, apart from stocks and soups to keep the chills at bay, that’s just about all that’s been going on this month In My Kitchen.

Check out Celia’s blog at Fig Jam and Lime Cordial for what’s going on in other kitchens around the world.

What’s been going on in your kitchen this month?