I’ve been back in the kitchen four days now after the Chinese New Year getaway and everything seems to be moving in slo mo with stupid jet lag. The first few days in Shanghai always take a bit of adjustment anyway – remembering to turn on the VPN for emails, Facebook, WordPress etc, psyching myself up for that first Carrefour stock-up run, getting back into a routine….

So it’ll come as no surprise to you after last month’s IMK post that the first thing I did on Friday, before any unpacking was done, was to feed Lucy Liu and put her into the bathroom for an overnight prove. My new enamel pot was christened on Saturday. 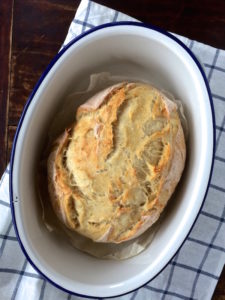 Picked up for a bargain 50RMB {$10AUD} on Dongtai Lu which is the ‘antique’ market here, soon to be demolished sadly. I was with Jen and The Cat Lady at the time and Jen was winding me up telling me it was a potty pot because the bottom part had been washed and had water in it and the top was filthy. A bit of charades followed  {I’ll leave that one to your imagination} and we’d soon established with the lovely lady that it was indeed an eating pot and not a potty pot. I got a bargain. Don’t you love that her husband was playing solitaire on the computer?

Francesca, look away now, because in my kitchen {also from Dongtai Lu} is a beautiful enamel bowl.


The girls roll their eyes now whenever I see enamel ware. ‘It’s old, it’s old’ the guy was shouting at me trying to distract me from the outrageously silly price he was asking with a cheeky grin.

I turned it over and it was made in 1986 – about the time the Pudong skyline was going up. I guess that’s old in Shanghai.


I’ve totally justified that purchase now! I paid 100RMB for it.


I have no idea how my love for all things licorice came up at Richard’s office, but one of his colleagues went to Denmark for Chinese New Year and brought me back a 425g bag of salted licorice. I’m too scared to open it because when I do it won’t last long!

I thought we’d be coming home with loads of gourmet goodies from San Francisco, but we didn’t. I’m not sure why because we did of lot of eating and drinking, and then lots of cycling and walking to work it all off. We had two nights in Point Reyes, a National Park about an hour north of the city which I think must be Oyster Central for the whole galaxy. We stopped off at a farm across the inlet from our cottage and picked up oysters and tabasco for dinner but they wouldn’t shuck them for us so we had to buy a knife. Nice little earner for the oyster farm I think!


And then of course the wine. We may have brought a ‘few’ back with us in the suitcases.


So that’s what’s been happening around these parts in the kitchen. What’s going on in your part of the world?

Head over to Celia’s blog at Fig Jam and Lime Cordial for more In My Kitchen posts and to check out all the goodies in her kitchen this month {don’t go over feeling hungry though}.